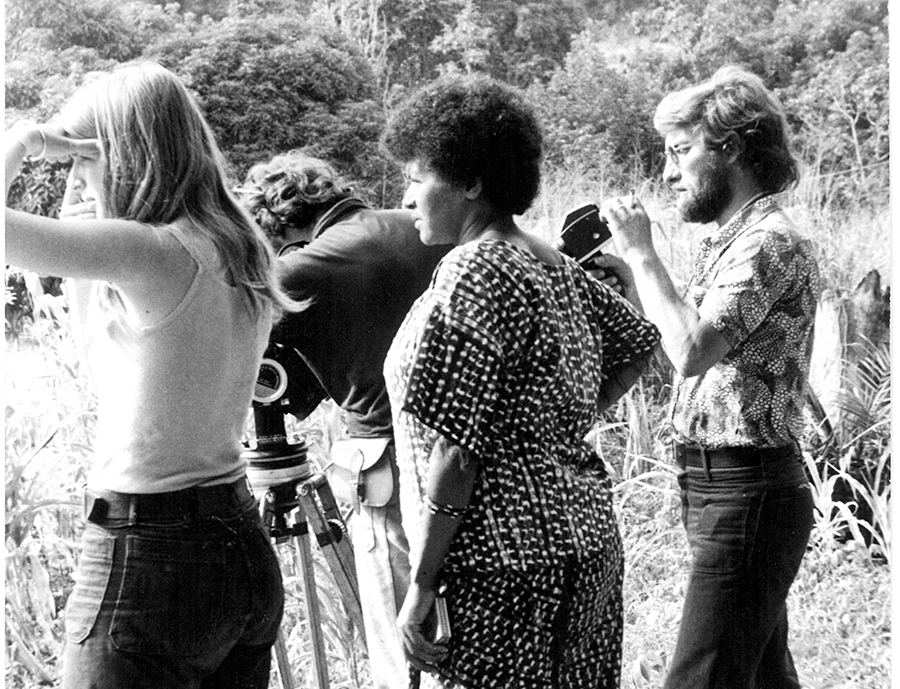 IN MEMORIAM – SARAH MALDOROR
Though her name remains unfamiliar to most, the French­born filmmaker’s work is central to postcolonial African cinema.

By Sukhdev Sandhu
It was only in her late Sos that Sarah Maldoror, who died in April at the age of 90 from coronavirus-related complications, began to attract the sustained attention of contemporary cinephiles. For most of her life, her politically radical, fiercely optimistic work, often chronicling anti-colonial struggles in Black Africa, was more whispered about than actually seen. Guns for Banta (1970), about the revolutionary struggle in Guinea-Bissau, was confiscated by the Algerian authorities who had financed it. She supplied images for Chris Marker’s Sans soleil (1983) but wasn’t credited. Other films, scratched and blurry, often lacking subtitles, surfaced briefly on filesharing sites before disappearing again.

Maldoror’s damaged, fugitive filmography is a prime example of what the artist-theorist Hito Steyer! has called “the Wretched of the Screen”. Its partisan coverage of mostly invisible conflicts in the Global South (invisible because of censorship, and because Portuguese colonialism, the main focus of her films, is comparatively understudied) is a crucial contribution to the field of militant cinema. Time and again, she explored not only the violated histories of Black peoples-from Africa and the Caribbean to the fringes and suburbs of the modem European metropolis – but the ways in which they reimagined their futures.

Maldoror was born in Condom, a small town in south-west France. Her mother came from the area, her father from the French-Caribbean archipelago of Guadeloupe. Her self-chosen surname was a tribute to The Songs of Maldoror (1869), a lengthy prose-poem by the Comte de Lautreamont that would later be championed by the surrealist movement, to whose political, if not aesthetic, sensibilities she was drawn. At first she worked in theatre, in 1956 co-founding the Paris-based Compagnie d’Art Dramatique des Griots, a pioneering ensemble of Black actors who aimed at the “creation of a modem Black theatre”.

Soon she was feeling migrant urges.

Galvanised by repeated viewings of Eisenstein’s Battleship Potemkin ( r 92 5), she moved to Moscow to study cinema. (One of her classmates was the Senegalese Ousmane Sembene, who would make his first film in 1963.) The Soviet capital was increasingly a hub for Third World Marxists who, whether in economics, politics or in art, were eager to map out new ideals for living. Another early r96os magnet for international freedom fighters and liberation activists was Algiers, which, according to Elaine Mokhtefi in a recent memoir about the capital, had an “open-door policy of aid to the oppressed”. Soon Maldoror was helping Gilles Pontecorvo to make The Battle of Algiers ( r 966), and in r 968 she made Monangambe, a startling r8-minute short about an Angolan woman visiting her imprisoned husband, and the crelty meted out to him by his Portuguese jailers.

Her best-known film remains Sambizanga (1972), the first feature in Africa to be directed by a woman. Set in r96 r, at the start of the Angolan War of Independence, and shot in Congo, the film tracks the resistance efforts of the Popular Movement for the Liberation of Angola (MPLA), a militant group whose leader
Mario Pinto de Andrade was also Maldoror’s husband. In part, it’s about the arrest and brutal torture of a tractor driver, Domingos Xavier, who lives in a working-class district of the capital city Luanda and harbours seditious beliefs such as: “There are no whites, no mulattos, no Blacks. There’s only the poor and the rich.”
Maldoror gives equal importance to his wife Maria who, carrying along her infant child, sets out to find him, going from one prison to another, confronting indifference, lechery, dead ends.

In her suffering, she becomes a kind of Mother Angola. Her doggedness and her heartache are portrayed with wounding acuity and illuminate Maldoror’s much-quoted belief that ”African women must be everywhere. They must be in the images, behind the camera, in the editing room and involved in every stage of the making of a film. They must be the ones to talk about their problems.” Yet Maria’s plight is not solely African or colonial; a dogged seeker of justice, she resembles the desperate women in Zhao Liang’s documentary Petition (2009). For the director, she evokes “the alone-ness of a woman and the time it takes to trudge … It could be any woman, in any country, who takes off to find her husband.”

One of Maldoror’s most enduring contributions to art and ideas is her belief in the French Caribbean as an intellectual crucible of the modem world. She made a number of films featuring Aime Cesaire, the Martinique-born poet who helped develop the philosophy of’negritude’, which promoted pan-African consciousness. Leon G. Damas(r995) is a ruminative essay about the French Guyanese poet-turned-politician in whose verse Cesaire claimed to discern “an existential Negro anguish which is very much West Indian and which is incontestably that of the Negro in the modem world”. In Regards de memoire(2003), she filmed influential Martiniquan theorist Edouard Glissant in the cell where Toussaint Louverture, leader of the Haitian Revolution, was held until his death in 1803. One of her unwritten final projects, Fanon: A Whisper in the Wind, would have dealt with the Martinique­born anti-colonial psychiatrist Frantz Fanon.

Maldoror didn’t only make films about Black cultural politics. Leningrad Hospital (1983), based on a story by the Russian writer Victor Serge, is a quietly potent anti-Stalinist drama starring the great Roger Blin as an anarchically inclined refusenik who asserts, “Fear is a contagious neurosis, but curable.” Miro, peintre(r979) is a short and contagiously joyful portrait of the Spanish artist which celebrates colour, the playfulness of children, the poetry of the streets. A short documentary Louis Aragon, A Mask in Paris ( r 97 8) gave her an opportunity to think about the surrealism that had so inspired her as a young woman. The more Maldoror films emerge from dusty archives, the harder it becomes to hold on to the idea of her as a militant firebrand. Dessert for Constance(r98r) is a delightful TV drama about a pair of African street-cleaners in Paris trying to raise funds to send a dying friend back home. They live with other migrants in a cramped apartment, but there’s plenty of bonhomie and banter in their lives. In the rubbish that lines the city they find a rare 19th-century cookbook whose recipes inspire them to open a restaurant.

There are touches of Agnes Varda here, elements of Mary Poppins and Ratatouille (2007) too. In any given scene, no matter how melancholic or even piteous, there’s a possibility that the performers will start tapping out beats or breaking into song. This is the case in all of Maldoror’s films, which are as much about music as they are about megaphones, collective song as much as collective suffering.